Join us for a talk and book signing by local historian and author Matthew Rozell. His books include:

NEW BOOK AVAILABLE AT EVENT: The Things Our Fathers Saw, Vol. V, D-Day and Beyond 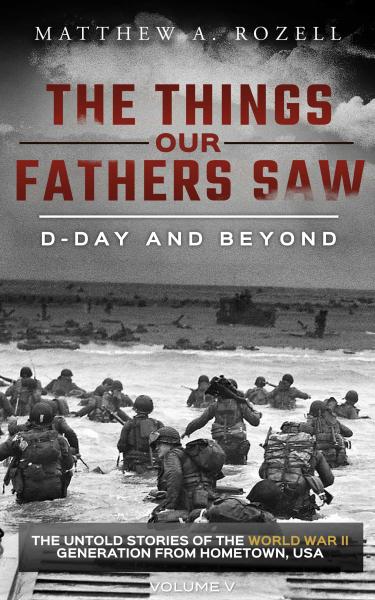 By the end of 2019, fewer than 400,000 of our WW II veterans will still be with us, out of the over 16 million who put on a uniform. But why is it that today, nobody seems to know these stories?

This book brings you more of the previously untold firsthand accounts of combat and brotherhood, of captivity and redemption, and the aftermath of a war that left no American community unscathed. From the bloody beach at Omaha through the hedgerow country of Normandy and beyond, American veterans of World War II—Army engineers and infantrymen, Coast Guardsmen and Navy sailors, paratroopers and glider pilots, military policemen and tank crewmen—sit down with you across the kitchen table and talk about what they saw and experienced, tales they may have never told anyone before.

As we forge ahead as a nation, we owe it to ourselves to become reacquainted with a generation that is fast leaving us, who asked for nothing but gave everything, to attune ourselves as Americans to a broader appreciation of what we stand for.

Featuring the testimony of 16 veterans in proper historical contextualization and new author insights.

Matthew Rozell is an award-winning history teacher, author, speaker and blogger on the topic of the most cataclysmic events in the history of mankind-World War II and the Holocaust. Rozell has been featured as the “ABC World News Person of the Week” and has had his work as a teacher filmed for the CBS Evening News, NBC Learn, the Israeli Broadcast Authority, the United States Holocaust Memorial Museum, and the New York State United Teachers.

As the founder of the World War II Living History Project, Mr. Rozell and his students recorded the testimony of hundreds from the WWII generation, one person at a time. One of his interviews, and his dogged pursuit thereafter, led to the reuniting of a train transport of Holocaust survivors with their actual American liberators over 60 years later and the discovery of one of the most iconic photographs of the Holocaust. Rozell is currently working on a trilogy of narrative World War II histories entitled “The Things Our Fathers Saw”.

Mr. Rozell grew up in the 1960s and ’70s in the foothills of the Adirondacks along the upper Hudson River, the cradle of liberty along the ‘Great Warpath’ and the backdrop of James Fenimore Cooper’s The Last of the Mohicans. Here, on the proving ground for many of the heroes of the American Revolution, Matthew spent his boyhood wondering and wandering, exploring the woods and waterfalls near his home  in pursuit of the tangible connections to the past that are always present,

but so often overlooked. Later, he channeled this energy into his passion for scientific avocational archaeology, and he is credited with some major military discoveries along the Northeast colonial frontier, including the smallpox hospital on Rogers Island in Fort Edward, the west curtain wall of Fort Edward itself alongside the river, and the bustling colonial trading post just south of the fort. With his dedicated crew, he also targeted and found the east and west barracks of Fort William Henry at the head of Lake George (see the books by David R. Starbuck, lead archaeologist, for further information).

In the 1980s, Mr. Rozell received his B.A. in History and MS in Education from SUNY Geneseo, and twenty years later, he received their Alumni Educator of the Year Award. He returned to his high school alma mater and soon thereafter founded the World War II Living History Project, collecting the evidence of the most cataclysmic war in the history of mankind-one person at a time.

In the summer of 2001, he sat down to interview a former tank commander in his hometown. After two hours of nonstop conversation and vivid recountings of battle after battle, the interview seemed concluded, and the camera was about to be turned off. On a prompt by his daughter, the old soldier then began to relay an incident from the the final days of the war. On an early spring day in 1945, deep in the heart of Nazi Germany, his tank and the tank of a fellow tank commander were directed to scout a mysterious train transport stalled on the tracks. It was loaded with concentration camp survivors and these soldiers and their major had just rescued them from imminent mass murder. Though still involved in a shooting war, the American Army immediately began to administer aid and medical assistance, and continued to do so for the several weeks.

Mr. Rozell pursued this story for years and uncovered one of the (now) most iconic images of the Holocaust, which was taken by these soldiers. His work led to the reuniting of nearly 300 Holocaust survivors with their actual American liberators, with several emotional and joyous reunions over 60 years later. His recently released best seller  A Train Near Magdeburg: A Teacher’s Journey into the Holocaust, and the Reuniting of the Survivors and Liberators, 70 years on brings to life narrative of resilience, survival, rescue, and reunification.

Mr. Rozell has been recognized as an Organization of American Historians History Teacher of the Year and as a recipient of the National Society of the Daughters of the American Revolution Founders’ Medal for History Education. He is a also a United States Holocaust Memorial Museum Teacher Fellow, and a recipient of several state and local awards for history education, including the prestigious NYS Education Department Louis E. Yavner Teaching Award for Distinguished Contributions to Teaching the Holocaust. He writes on the importance of the study of history and the power of teaching at  TeachingHistoryMatters.com.

When not doing history stuff or teaching, he likes riding around on his tractor, splitting wood (to an extent), building furniture, taking photographs, working on the house (to an extent) and taking care of the family camp in the Adirondacks. He is married to a patient and loving wife, Laura, also an educator, and they have three children, two of whom were lucky enough to take their father’s classes in school. They also care for a menagerie of animals on their 64-acre spread in Washington County, NY.

On the Brink of Everything: Grace, Gravity, and Getting Old (Hardcover)