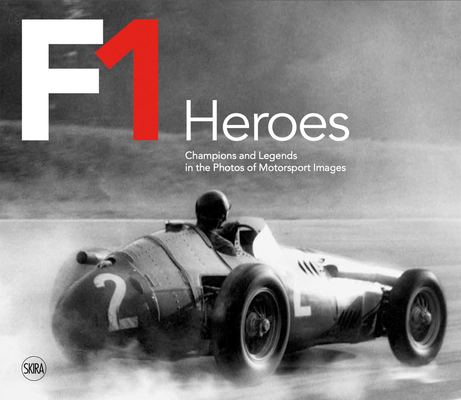 A thrilling visual history of Formula One racing

This fully illustrated history takes a journey across 70 years of the most spectacular images from the archives of the great champions who have made the history of Formula One and the Grand Prix. It follows the storied history of this widely popular sport from the first championship, won by the daring Nino Farina with his Alfa Romeo and his famous cigar between his lips, to British driver Lewis Hamilton's heroic exploits, taking in all the legends of Formula One en route, among them Alberto Ascari, Juan Manuel Fangio, Niki Lauda, Ayrton Senna, Alain Prost and Michael Schumacher.
The 200-plus images in this volume do not neglect the incredible feats of engineering that made the drivers' stories possible: F1 Heroes also traces the history of Formula One cars from the tube chassis warhorses that dominated the early races, such as those built by Alfa Romeo, Ferrari and Maserati, to the modern high-tech automobiles that speed around the track today.
A spectacular account of the winners and their extraordinary cars and their duels, but also a story of big defeats and great heroes who, while they did not win the championship, still became legends, such as Gilles Villeneuve.