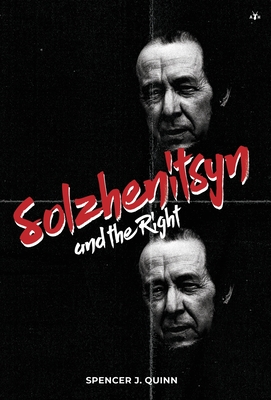 "During my time in the camps, I had got to know the enemies of the human race quite well: they respect the big fist and nothing else; the harder you slug them, the safer you will be." -Aleksandr Solzhenitsyn

One of the most famous anti-Communist dissidents, Russian-born Aleksandr Isayevich Solzhenitsyn was a war veteran, philosopher, historian, novelist, and political prisoner. At one time a firm believer in Marxist-Leninism, he fought for the Red Army in the Second World War until a private criticism of Joseph Stalin resulted in his arrest and eight-year imprisonment within the brutal Soviet gulag system. As he turned away from Communism and back to the Christian faith of his birth, his writings increasingly drew the ire of the Soviet authorities until his ultimate deportation in 1974.

In exile, Solzhenitsyn became disenchanted with the values upon which most modern Western nations were founded. Decrying their lack of spirituality and tradition as producing men with weak ties to God, their ancient soil, and to each other, he never ceased predicting the downfall of the West.

With a multitude of important political observations and experiences, Solzhenitsyn was a prolific writer whose works are intimidatingly long. His three-volume opus on the Soviet forced labor camps, The Gulag Archipelago, approaches 2,000 pages. Two Hundred Years Together, his two-part study of Jews in the Russian Empire and the Soviet Union, comes in at over 1,000 pages in the original Russian. The English translation of The Red Wheel, his four-part cycle of historical fiction about the fall of Tsarist Russia, presently weighs in at over 3,000 pages. The restored edition of In the First Circle, a novel about gulag prisoners working for Stalin's state security apparatus, consists of more than 700 pages. Naturally Solzhenitsyn's own memoirs are suitably immense, with The Oak and the Calf, Invisible Allies, and the first two books of Between Two Millstones spilling out over 1,700 total pages. As a great service to modern dissidents, Spencer J. Quinn has distilled the ideas and observations from Solzhenitsyn's vast corpus into a slender volume which can be quickly consumed and learned.

Antelope Hill Publishing is proud to present Solzhenitsyn and the Right, an original work in which Spencer J. Quinn has refined Solzhenitsyn's anti-Leftist, anti-progressive, and traditionalist political themes into nothing less than a metapolitical weapon against the enemies of humanity.