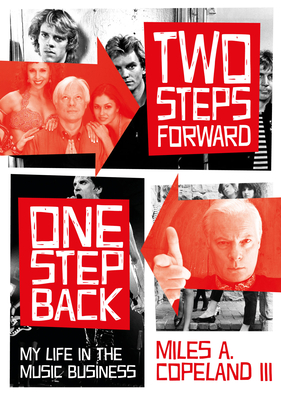 "My real story starts with a disaster, an unmitigated, pull-the-rug-from-under-you, clean-out-the-bank-account disaster. But had it not happened, The Police would never have risen to become the biggest rock band in the world; Jools Holland would not have ended up on TV; The Bangles, The Go-Go’s, R.E.M., and many other music stars might never have made it either. It’s strange how a fluke, a disaster, an unlikely event can lead to incredible results. But that is in essence what happened to me . . ."

Two Steps Forward, One Step Back tells the extraordinary story of Miles A. Copeland, a maverick manager, promoter, label owner, and all-round legend of the music industry. It opens in the Middle East, where Miles grew up with his father, a CIA agent who was stationed in Syria, Egypt, and Lebanon. It then shifts to London in the late '60s and the beginnings of a career managing bands like Wishbone Ash and Curved Air—only for Miles’s life and work to be turned upside down by a disastrous European tour.

From the ashes of near bankruptcy, Miles entered the world of punk, sharing a building with Malcolm McLaren and Sniffin’ Glue, before shifting gears again as manager of The Police, featuring his brother, Stewart, on drums. Then, after founding IRS Records, he launched the careers of some of the most potent musical acts of the new wave scene and beyond, from Squeeze and The Go-Go’s to The Bangles and R.E.M.

The story comes full circle as Miles finds himself advising the Pentagon on how to win over hearts and minds in the Middle East and introducing Arabic music to the United States. "Never let the truth get in the way of a good story," his father would tell him. In the end, though, the truth is what counts—and it’s all here.

Miles Copeland is a notorious icon and Svengali of the music business known primarily as manager for such superstars as The Police, Sting, Jools Holland, Squeeze, and The Bangles. He is also the founder of IRS Records, the most influential music label of the '80s, which launched the careers of The Go-Go’s, R.E.M., Fine Young Cannibals, The Alarm, Concrete Blonde, and Timbuk 3. As agent, manager, or record company, he has worked with artists as varied as the Sex Pistols, Keith Urban, Wishbone Ash, Zucchero, Buzzcocks, The Cramps, Wall Of Voodoo, Blondie, The Moody Blues, and a host of others.

In histories of the world, men and women who have achieved greatness and fame have purchased a place in the memory of the public because of their extraordinary lives and deeds. Shakespeare for his plays, Caligula for his cruelty, King Solomon for his wisdom. In the arena of the music business, there is a podium reserved for the legendary managers of artists and musicians. This book that you hold in your hand tells the story of one of the giants of that world. This refreshing and provocative book will surprise, shock, and inform both music-business insiders and civilians on the fringes of showbusiness. It is an essential read for anyone considering a career in the music industry. Here then is a story told with brutal honesty (for a manager) from a man who will be remembered for launching the careers of many household names, and fondly by me, for releasing my first solo record and launching my career in television.—Jools Holland

Miles was larger than life to our band, The Go-Go’s. We were in awe and a little bit afraid of him, but at the end of the day we considered him a protector, and we knew we could trust him. He helped us navigate the early days of our career. He’s a legend!—Belinda Carlisle

Miles Copeland was to The Police what Brian Epstein was to The Beatles: mastermind, minder, and impresario. Two Steps Forward, One Step Back is the almost-too-strange-to-be-true tale of how Copeland, a brash and astute American whose father helped found the CIA, gamed out a strategy for success in the music industry, refashioning punk into its commercial cousin, new wave, and launching a bunch of misfit outsiders into the mainstream through his label, IRS, inadvertently creating the template for indie and college rock; as well as guiding the career of an unlikely dungaree-wearing, Geordie bass player called Sting into an equally unlikely chest-baring, eco-warrior, tantric yoga-practicing rock megastar.—Chris Campion, biographer of The Police

"...an entertaining look at how Miles went from a rudderless college grad with a passing interest in music to one of the most influential label heads and managers of the 1980s and ‘90s."—John Moore, Glide Magazine