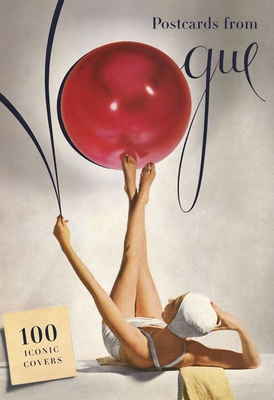 By Vogue Editors (Compiled by)
$25.00
Email or call for price

A collection of 100 postcards, each featuring a striking cover from American Vogue. From early aspirational illustrations to modern celebrity photography, this is a stunning selection of Vogue's most dazzling images. Since its launch in 1892, Vogue has brought sophistication to its readers around the world. Early illustrations from artists including George Wolfe Plank, Olive Tilton, Pierre Brissaud, and Eduardo Garcia Benito saw ethereal figures of fantasy develop into red-lipped flappers, and as colour photographs began to appear, the women transformed again: from Surrealist images by Horst P. Horst to 'women in the life of the moment', captured by Irving Penn. From the fifties onwards, Vogue women became more accessible still, as models and stars like Elizabeth Taylor, Goldie Hawn, Cindy Crawford, and Cher, with their own distinct personalities, appeared through the lenses of Richard Avedon and Snowdon. Vogue covers now are the epitome of style and beauty, with such illustrious photographers as Mario Testino, Annie Leibovitz, Steven Klein, and Patrick Demarchelier photographing stars like Lady Gaga, Kirsten Dunst, and Kate Moss, celebrating female icons across modern culture.

Since its launch in 1892, the editors of Vogue have brought sophistication to its readers around the world. Vogue Magazine looks at culture through the lens of fashion. Since 1988, Dame Anna Wintour has held the position of Editor-in-Chief of Vogue. For her service to British journalism and fashion, Wintour was named Dame Commander (DBE) of the Order of the British Empire by Queen Elizabeth II in 2017; she was previously appointed to the Order of the British Empire in 2008. In 2009, President Obama appointed Wintour to the President’s Committee on the Arts and Humanities.