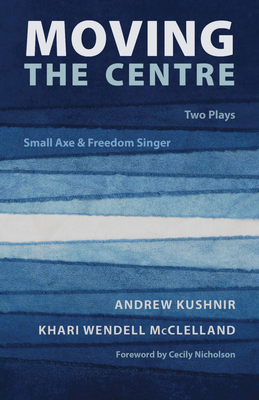 Moving the Centre explores the work of two theatre artists who dare, fumble, and persist in bringing audiences into a space where we can all listen differently. The two plays it includes -- Small Axe and Freedom Singer -- lean into the problems and possibilities of verbatim theatre to engage questions of justice and identity and the complex history all around us. Originally developed and produced by Toronto's socially engaged theatre company Project: Humanity, these plays explore the power of recorded "real-life" encounters as a way for artists and the public to re-examine our defining narratives.

Small Axe charts the quest of a queer white playwright, Andrew Kushnir, who - because of an unsettling moment with a friend - feels a pull towards investigating homophobia in Jamaica. What starts as an artist researching an injustice to which he feels some kinship, evolves into a startling excavation of self and the stories we claim of others. To whom does an injustice "belong"? Through a constellation of exchanges - with activists, refugees, priests and ministers, journalists, fellow artists, Pride Festival revellers, and many Black queer people, Small Axe invites us to sit with our differences in order to discover how intricately connected we are. Freedom Singer is a musical/verbatim theatre hybrid, constructed from hard-won archival material and family lore, documenting playwright Khari Wendell McClelland's search for his ancestral grandmother Kizzy and the songs she may have sung during her escape through the Underground Railroad. For him, the "songs are like maps" leading back to the past, the enduring impacts of slavery and our capacity to lovingly reunite with denied histories.

With an opening essay by Kushnir and a concluding essay by McClelland, the book's literal centre (between the plays) is a verbatim dialogue where the two discuss the white gaze vs. Black "looking back," theatre-as-a-practice, and how centring caring and equitable relationships is what can make this kind of challenging theatre more ethical, more viable, and more truthful. Governor General Literary Award-winning poet Cecily Nicholson provides a powerful foreword.

Andrew Kushnir is a playwright, director and performer who lives in Toronto. He is artistic director of the socially engaged theatre company Project: Humanity, a leading developer of verbatim theatre in Canada. His produced plays include The Middle Place (Toronto Theatre Critic's Award), Small Axe, Wormwood, The Gay Heritage Project (co-created with Paul Dunn and Damien Atkins, 3 Dora Award nominations) and Freedom Singer (co-created with Khari Wendell McClelland, toured nationally to 14 cities/towns). His most recent theatre piece, Towards Youth: a Play on Radical Hope, premiered in February 2019 in a co-production between Project: Humanity and Crow's Theatre; his associated documentary film Finding Radical Hope premiered in February 2021. Spring 2021 saw the release of Andrew's theatre history investigative podcast series, This Is Something Else, which he created and hosted for the Arts Club Theatre Company. He is a graduate of the University of Alberta, a Loran Scholar and alumnist of the Michael Langham Workshop for Classical Direction at the Stratford Festival. In April 2019, he became the first-ever recipient of the Shevchenko Foundation's REACH prize. kushnirandrew.com Vancouver-based Khari Wendell McClelland originally hails from Detroit and has over the past decade become a darling on the Canadian music scene for his distinct mix of soul and gospel. In 2017, he premiered his multi-disciplinary work of theatre, history and music, Freedom Singer which recreated the songs that fugitive slaves carried on their journey north into Canada. Interweaving re-invented songs with verbatim interview transcripts, the piece had three national tours. A much sought-after facilitator and teacher, Khari leads workshops around the globe fostering community, the arts and justice through values-based creative facilitation. khariwendellmcclelland.com