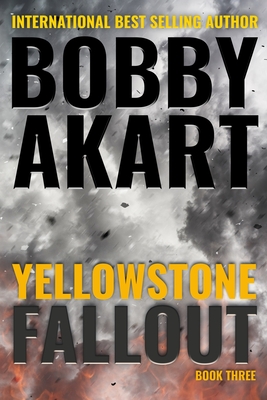 This is book number 3 in the Yellowstone series.

Yellowstone was not an ordinary volcano.
It was a cannon of immense size, equal in destructive capability to all of mankind's nuclear weapons - combined.
It was quite frankly, Earth's greatest killer.

The Yellowstone Series, a new disaster thriller from international best-selling author, Bobby Akart, takes the reader on a thrill ride as a cataclysmic event of extinction level proportions ticks away like a time bomb, awaiting its moment. Millions of people visit the Yellowstone National Park every year blissfully unaware they are on top of the greatest killer man has ever known - the Yellowstone Supervolcano.

Modern man had studied the eruption and aftermath of volcanos on our planet for two centuries, but in the past one hundred years, scientific equipment allowed them to predict the environmental impact. When assessing the fallout of the fourth major eruption of the Yellowstone Supervolcano, the prediction models were wrong.

No part of our planet will be left untouched by the fallout. Those who weren't incinerated by the eruption will be poisoned by the gas or succumb to the ash mixing with the fluids within their bodies. For those lucky enough to survive the direct effects of the eruption, they were subject to starvation and dysentery as the ash fallout created a volcanic winter.

And then, there was the threat of their fellow man.

Know this. The eruption of the Yellowstone supervolcano will be more than a spectacle to grab our attention. It will be the end of the world as we know it.


ABOUT THE YELLOWSTONE SERIES

Volcanoes are the Earth's way of letting off steam. While most people look at volcanic eruptions as natural disasters, the fact of the matter is, without them, the Earth would explode. Deep beneath the surface of the planet, excess heat builds up, finding a way to vent. Like an overcrowded bus on a hot summer day, the overheated magma stews in its own madness, allowing pent-up frustrations to boil over, until it releases its fury - its HELLFIRE - upon the world above.

Yellowstone is the most potentially explosive, violent, deadly, active volcano on our planet and scientists agree, a catastrophic eruption is inevitable. Yellowstone is extraordinary in its potential and is quite simply, Earth's greatest killer. You've been warned.

BOOKS IN THE YELLOWSTONE SERIES