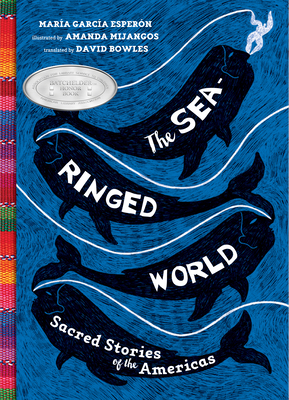 A collection of stories from nations and cultures across our two continents—the Sea-Ringed World, as the Aztecs called it—from the Andes all the way up to Alaska.

Fifteen thousand years before Europeans stepped foot in the Americas, people had already spread from tip to tip and coast to coast. Like all humans, these Native Americans sought to understand their place in the universe, the nature of their relationship with the divine, and the origin of the world into which their ancestors had emerged. The answers lay in their sacred stories.

María García Esperón was born in Mexico City and has won many awards including the Hispanic American Poetry Award for Children. Her novel Dido for Aeneas was selected in 2016 on the IBBY Honour List.

Amanda Mijangos was born in Mexico City and is the founder of the illustration studio Cuarto para las 3. Her work has been recognized with awards several times and in 2017 she was the winner of the VIII Iberoamerica Illustra Catalog.

David Bowles is a Mexican American author and translator from South Texas. Among his multiple award-winning books are Feathered Serpent, Dark Heart of Sky: Myths of Mexico, and They Call Me Güero. In 2017, David was inducted into the Texas Institute of Letters.


[STAR] “The language sparkles and the tales beg to be read aloud.” -School Library Connection (starred),


[STAR] “A rich anthology to understand and delight in Native traditions.” -Booklist (starred),


“David Bowles’ graceful translation renders this volume an excellent addition to any storytelling collection.” -The Bulletin of the Center for Children’s Books,


“With its one-of-a-kind art to accompany each tale, it is a collection that will appeal to children, but also to any lover and collector of books." -BookRiot,