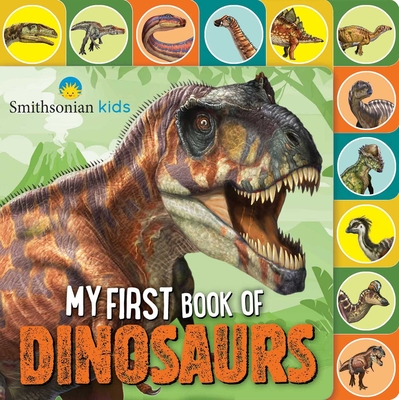 Thirty different dinosaurs and other prehistoric creatures march or fly their way across the pages of this tabbed board book that introduces preschoolers to the magnificent creatures that once ruled the Earth!

Dive into the prehistoric world with Tyrannosaurus rex, Plateosaurus, Stegosaurus, and more of the coolest dinosaurs that ever lived! Smithsonian: My First Book of Dinosaurs features 30 different dinosaurs and includes fascinating facts about when they lived, what they ate, and much more! The simple text and accompanying striking images of dinosaurs in action, along with tabs perfectly sized for little hands, will delight preschoolers for hours!

Grace Baranowski is originally from Arizona, but moved to San Diego, California, after receiving her B.A. in English from Occidental College. With a background in early childhood education, Grace loves being able to write and create exciting new content for children. In her free time, she enjoys exploring San Diego and all it has to offer.

Franco Tempesta was born in Milan, Italy. Since he was a child, he loved drawing animals, dinosaurs, and dragons. Specializing in naturalistic illustration, in the last ten years he has focused his attention on the realization of realistic images of dinosaurs and primitive mammals. He has collaborated with national and foreign publishers, such as Smithsonian, National Geographic, Random House, Firecrest Publishing, Geoworld, and important advertising agencies of Italy. Since 1990, he has been a member of the Italian Illustrators Association. In April 2014, the Museum of Paleontology of Naples hosted a permanent exhibition dedicated to his illustrations of dinosaurs. Franco Tempesta loves nature, the sea, diving, and traveling.