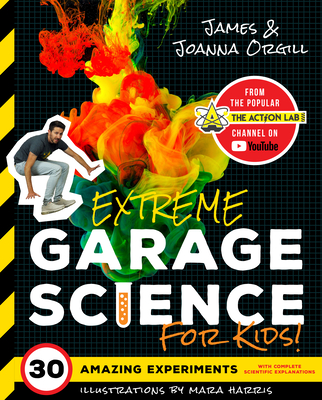 For years, James Orgill has amazed millions of YouTube fans with zany experiments in his popular videos on The Action Lab channel. Now, for the first time, you can do these experiments at home! Extreme Garage Science for Kids! is jam-packed with killer projects and irresistibly nerdy explanations of how the world works. Draw on water. Remove the iron from your Cheerios. Defy Newtonian physics! Bursting with fun illustrations and full-color, photographed step-by-step instructions, Extreme Garage Science for Kids! is a thrilling scientific adventure for young minds everywhere!

James Orgill graduated with a BS in chemical engineering in 2010 and received his PhD in chemical engineering in 2014 from Brigham Young University. While working as a process engineer in the semiconductor industry, he began a YouTube channel in 2015 called The Action Lab. Because of the unique focus on a wide audience, his YouTube channel grew quickly, and as of June 2018, has amassed 2.1 million subscribers and a total of 250 million views. He enjoys his work as a scientist/engineer and loves to teach people. He is married to Joanna Orgill, and they have four wonderful children together. He loves being a father and husband and spends any spare time playing with his kids.

Joanna Orgill graduated with her BS in exercise science in 2008 from Brigham Young University and with her masters of physician assistant studies at the University of Utah in 2010. She has worked as a PA since then along with the full-time job of mothering four children. During any free time she can find, she loves to paint and take pictures. She is an amazing writer, is wonderfully supportive of her husband's YouTube channel, and has made many sacrifices to make it possible.

Mara Harris is a graphic designer, illustrator, and travel lover. She was born in the UK but spent her childhood growing up in the foothills of Southern California. She studied neuroscience and communication design at the University of Southern California and utilizes her dual love for science and illustration to bring a unique perspective to her work. She is most enthusiastic about children's book illustration, educational design, and design for print. She is currently based in Los Angeles, where she lives with her family and two quirky cats.

Owling: Enter the World of the Mysterious Birds of the Night (Hardcover)