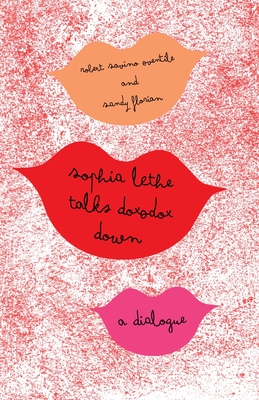 There's a long history of dialogue-poems: Sir Philip Sidney, William Butler Yeats, Sylvia Plath, and Emily Dickinson. Oventile and Florian are working that side of the street today but with a lot more octane. In love with language and blessed with a sense of humor, these two poets entertain, enlighten, and expand everyone's horizons. --Ron Koertge, author of more than a dozen books of poetry, has poems in two volumes of Best American Poetry and is a 2017 Pushcart Prize winner. Koertge is also the author of the poem "Negative Space," short-listed for a 2018 Oscar in Animated Short Films.

Sophia Lethe Talks Doxodox Down tells of Doxodox's not quite requited amorous entanglement with Sophia Lethe.

The story takes the form of brief poetic dialogues between the two. Each dialogue exercises a specific trope, the name of which lends the given dialogue its title. Doxodox implores; Sophia Lethe demurs. Though their standoff becomes infernal, the two maintain their mordant and sometimes lewd humor as they muse on the possibilities and impossibilities of desire, life, and fate. Doxodox persists to the end, but does Sophia Lethe ever actually fall for him?

Sophia Lethe Talks Doxodox Down by Robert Savino Oventile and Sandy Florian conducts the reader on a boisterous tour of tropes to the heart of a vertiginous folie deux.