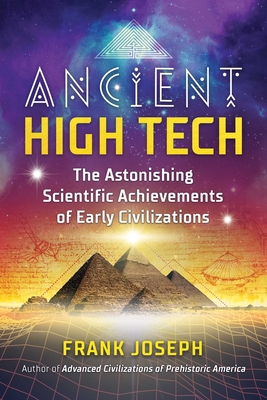 A detailed look into ancient advanced technology, science, and medicine--some of which has yet to be reproduced today

The first self-igniting match was invented in 1805 by Jean Chancel, a French chemist. Yet, in Babylon, 3,600 years before, identical sulfur matches were in common use. On the Panchavarnaswamy Temple in India, built millennia ago, there is a detailed carving of a man on a bicycle, yet the bicycle wasn’t invented in the modern world until 1817. These inventions are only two examples of technology lost in the Dark Ages.

By examining the achievements of our ancient ancestors, we can not only reverse-engineer their inventions but also learn from their civilizations’ mistakes, enabling us to avoid more dark ages. Imagine how scientifically advanced humanity would be if our early achievements had escaped destruction and been allowed to develop?

Frank Joseph was the editor in chief of Ancient American magazine from 1993-2007. He is the author of several books, including Before Atlantis, Advanced Civilizations of Prehistoric America, The Lost Civilization of Lemuria, and The Lost Treasure of King Juba. He lives in the Upper Mississippi Valley.

“Based on extensive research including the latest findings, Frank Joseph delivers in this book a comprehensive overview of our ancient ancestors’ remarkable achievements, much of them lost to the sands of time. Frank Joseph once again shows why he is a leading expert on ancient civilizations with this impressive book backed up by plenty of evidence. Who would have thought that many of the modern conveniences we take for granted were also enjoyed by our ancient ancestors?!”
— David P. Jones, editor and director of New Dawn magazine

“Frank Joseph is an utterly brilliant, fearless explorer of our ancient hidden past. His books are peerless, mind-bending trips of discovery into the scientific genius of civilizations that once ruled the planet. His dedication to revealing our true history--kept hidden from us by orthodox, grant-fueled ‘science’ and those who control our world--is unfailingly inspiring. In this, his newest work, he once again guides us on a breathtaking, dazzling journey into the reality of the advanced science and incredible technologies our forebears discovered and used to make their civilizations thrive.”
— Jeff Rense, host of the Jeff Rense Program

“Impeccably researched, Ancient High Tech transports the reader back through history to the remarkable technological achievements of various ancient civilizations around the globe. From the earliest attempts at aviation to refined structural engineering to sophisticated healing therapies, Frank Joseph’s comprehensive investigation illustrates that early cultures were much more advanced than generally believed. Each of the progressive societies mastered various forms of technologies and each suffered a similar fate: they collapsed. Perhaps Ancient High Tech is a compelling reminder and warning that technology does not make a civilization superior.”
— Brit Elders, CEO at shirleymaclaine.com

“Frank Joseph’s new book on the amazing technology and early breakthroughs of ancient civilizations is a wonder to behold. It includes mind-blowing tangible proof in pictures of physical artifacts that depict everything from ancient heat rays to Byzantium-era hand grenades and early creations for human flight. When the world entered the dark ages of collapsing civilization in both the West and the East, so much of the scientific, technological, and early medical knowledge of the ancients was lost. Frank helps locate the missing pieces for us. Explore this amazing book and its fascinating author at your earliest convenience.”
— Von Braschler, author of Seven Secrets of Time Travel

"Frank Joseph is an author of incredible talent and research ability. He is able to find information about topics that no one else can. His writing style is so engrossing, entertaining, and just enjoyable--an excellent way to present research to the general public. I strongly recommend Ancient High Tech and any of his other books. Frank Joseph is one of my favorite authors, and I always look forward to a new book of his."
— John DeSalvo, Ph.D., director of the Great Pyramid of Giza Research Association and author of The Lo

“With Ancient High Tech, Frank Joseph has once again created an exceptionally interesting and informative story of our highly advanced ancient ancestors. This book adds significantly to the evidence for advanced sophistication of our ancient ancestors. A master of in-depth research and fact gathering, he’s helping us see our ancient past in a new light one book at a time.”
— Andrée L. Cuenod, author of Awakening: A Journey of Enlightenment

“Frank Joseph can be controversial, but he is never anything less than thought-provoking. Written with a discerning eye and a global perspective, when he delves into a topic--be it an Aztec death whistle or the electromagnetic properties of Egyptian pyramids--you are guaranteed a fascinating journey into the past.”
— David Goudsward, author of The Westford Knight and Henry Sinclair

“The book is extensively researched and challenges readers to assess the significance of the evidence for themselves and reflect on our continuing destructive tendencies embodied in technology that make us a danger to ourselves.”
— David Lorimer, Paradigm Explorer