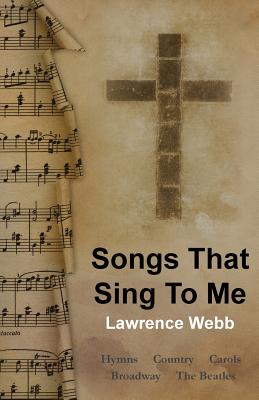 Various kinds of music can have strong emotional, psychological, and spiritual impact on us. So can lyrics. Christian minister and emeritus university professor Lawrence Webb looks at lyrics to more than forty songs from a variety of genres that "sing" Christian messages to him. He says, "Not all the songs were written from a Christian perspective. Not every composer of the lyrics intended to make a spiritual impact. But that doesn't matter. When I hear each of these songs or call their lyrics to mind, they sing things of God to me. I hope they will also sing to you." In addition to the hymns, songs range from Woody Guthrie's "This Land is Your Land" and the Beatles' "Eleanor Rigby" to "Who Am I?" from "Les Miserables" and Don Quixote's "The Impossible Dream." Country selections include "Almost Persuaded" from the 1960s and "Have I Told You Lately That I Love You" from the 1940s. Christmas carols include the traditional "O Holy Night" and "I Heard the Bells on Christmas Day," as well as two original texts by the book's author. The book concludes with a meditation on the original Christian text of Robert Lowry's "How Can I Keep from Singing?

Blessed with a good memory and a love for music from childhood, Lawrence Webb memorized lyrics for dozens of songs in the 1940s and 1950s. The songs range from hymns he sang in church to country and Broadway show tunes he heard on the radio. Later, he would encounter the Beatles and Woody Guthrie and others. With his varied background as college professor, editor, and minister, he began to recognize Christian ethical implications in songs that had no overt religious language. In this book, he combines that broad awareness with beloved hymns of the church, reflecting on more than forty selections -- all of which he says are "Songs That Sing to Me." And he hopes they will also sing to you.