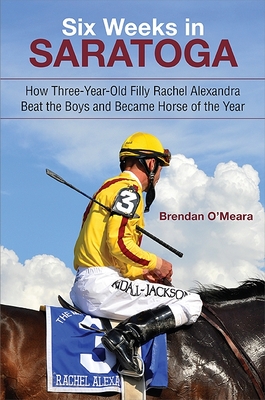 When Rachel Alexandra thundered to a stylish win against the boys in the 2009 Preakness Stakes, her connections came to the 141st Saratoga Race Course meeting wanting more than just another victory. They wanted Horse of the Year. Her jockey, Calvin Borel, pointed triumphantly to the three-year-old filly beneath him. Rachel Alexandra was the best horse he had ever ridden and it was his job to ensure that she and her connections didn't leave Saratoga Springs without a victory. Hall of Fame trainer and gruff New Yorker Nick Zito felt he could slay the queen. He'd take his shots with two rival horses, Da' Tara and Cool Coal Man, because, as he well knew, you can't win if you don't play. New York Racing Association president and CEO Charlie Hayward knew that Rachel Alexandra could run elsewhere and didn't have to come to Saratoga. The pressure was on him to keep this talented and magnetic filly on his property, but how far could he go without compromising his values? Then there were the other horses at the meet: the Zito-trained Commentator, eight years old and looking for one last try in the Whitney Handicap; Kentucky Derby-winner Mine That Bird, aiming to reclaim his glory if he could only stay healthy; and Summer Bird, the Belmont Stakes winner, who demanded respect. Everyone was in the twilight of their careers. What would be their legacies? How would they be remembered? Never before has the famous racing season at Saratoga been illustrated through these threads, in real time. As we follow the jockey, the trainer, and the executive, we come to understand how they, and so many other racing fans and professionals, were drawn to the magnetism of one special horse, Rachel Alexandra. All of this happens in six weeks, all at Saratoga.

Brendan O'Meara is a freelance writer who has written on racing and sports for the Saratogian, Paulick Report, and Horse Race Insider. He lives in Saratoga Springs.