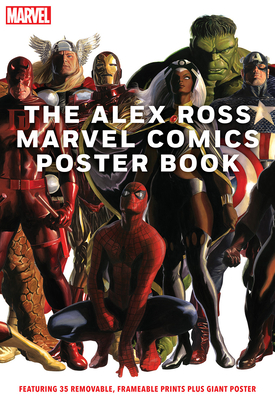 From Angel to Wolverine, all your favorite Marvel Comics super heroes are featured in this exclusive collection of painted portraits by Alex Ross—one of most respected and influential artists working in comics. This first-ever collection of these iconic images includes 35 ready-to-frame, removeable art prints—perfect for longtime Marvel fans and those just discovering these classic heroes for the first time—as well as commentary by Ross, preliminary sketches, and a bonus four-page gatefold of the portraits, assembled into a mural that was commissioned for Marvel’s New York City offices. These heroic posters showcase the Marvel super heroes as you’ve never seen them before—as realistic as any on the silver screen—painted in the award-winning, breathtaking style that made Alex Ross famous.

Alex Ross studied at the American Academy of Art in Chicago, then honed his craft as a storyboard artist before entering the field of comics. In 1993, Marvels—his groundbreaking miniseries with writer Kurt Busiek—created a wider acceptance for painted comics. In 1996 he and writer Mark Waid produced the equally successful Kingdom Come for DC Comics, and followed those up with an extensive series of work including magazine and album covers, as well as a poster for the Academy Awards. Ross has also been the subject of two monographs written and designed by Chip Kidd—Mythology: The DC Comics Art of Alex Ross and Marvelocity: The Marvel Comics Art of Alex Ross. His latest book is The Alex Ross Marvel Comics Poster Book (Abrams ComicArts, Spring 2021).

“Every one of the hundreds, if not thousands, of pieces [Alex Ross] has done perfectly captures the essence of these iconic characters… And now, you can hang his work on your wall.”
— Looper

“With plenty of gorgeous Alex Ross art, the huge format, and a very reasonable price, The Alex Ross Marvel Comics Poster Book is a no-brainer for fans of Alex Ross and Marvel.”