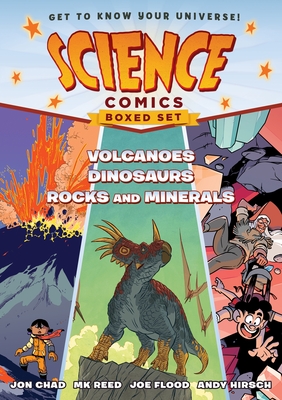 Readers can't get enough of Science Comics, so we're delivering three fan-favorite titles in an attractive and affordable boxed set!

Jon Chad is obsessed with giant robots, screen-printing, and bookmaking. Chad has been commissioned by Cartoon Network to make artist books based on shows like Adventure Time and The Amazing World of Gumball. He is the author of Leo Geo, Science Comics: Volcanoes, the illustrator of Science Comics: Solar System, and the creator of the multi-format immersion narrative BAD MASK. He also drew the art package for The Jetsons pinball machine for The Pinball Company and Spooky Pinball.

MK Reed is the writer of Americus, The Cute Girl Network, Palefire, and the Eisner-nominated Science Comics: Dinosaurs. She writes and draws About a Bull, a web-comic adaptation of Irish mythology. MK lives in Portland, Oregon, with her very tall husband.

Joe Flood is a comic book author and illustrator whose work includes Cellies, Pirates of the Caribbean and Orcs: Forged for War. For the Science Comics series, he collaborated on Dinosaurs: Fossils and Feathers with MK Reed and wrote and illustrated Sharks: Natures Perfect Hunter. He lives with his wife and daughter in New Yorks Hudson Valley.

Andy Hirsch is a cartoonist living in Dallas, Texas. He is the author and illustrator of several entries in First Second's Science Comics series, including Dogs: From Predator to Protector, Trees: Kings of the Forest, and Cats: Nature and Nurture.