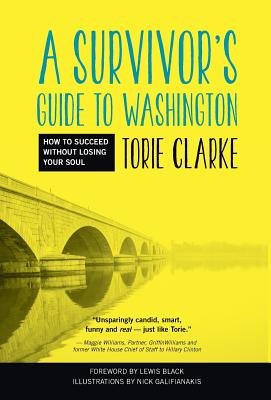 Torie Clarke has operated at the highest levels in the shark tank of the nation's capital without paying the one price that success in Washington often exacts: her soul. Known for her down-to-earth demeanor, Clarke has built and maintains close friendships on both sides of gaping partisan divides. She's struck a balance between work and family in a town that can demand a choice between the two. Now, in "A Survivor's Guide to Washington," Clarke explains how she's done it and how others can succeed in the realms of politics and public relations while maintaining their integrity-and sanity-too. Built around a series of questions Clarke has received in private conversations as well as through hundreds of public appearances, the book offers practical advice on topics ranging from handling a boss's over-the-line advances to when it is-and isn't-OK to bolt one Washington job for another. She includes advice she solicited from admired and respected Washington figures. Sprinkled throughout are anecdotes from Clarke's three decades in the back rooms, boardrooms and green rooms of the nation's capital.