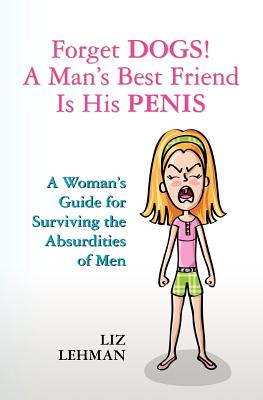 Men have been obsessed with their penis ever since the Garden of Eden, when Adam said to Eve, "Watch out I don't know how big this thing is going to get." In any relationship, a woman finds herself responding to a puppet being manipulated by a penis. FORGET DOGS A MAN'S BEST FRIEND IS HIS PENIS is a woman's guide to mastering the art of puppetry. The book is a critical tool that will help a woman survive relationship issues including the often frustrating dating process, marriage and divorce. Be equipped with the right verbal ax to cut your man down to size, when he says he is going out to a strip club to get a lap dance with his buddies. Stop men from duping you into believing that it is a man's world. Spot the situation and avoid the brainwashing. Read comparisons of male sexuality and the female libido, but fasten your seatbelt, because the ride is hilarious. The chapters expose realities of relationships using comical advice. Topics range from bedroom boredom, animal instincts, alien behavior, flirtations, office romances and friendly stalking. The author introduces a new lexicon for men and women, explaining "mentalpause", "automophilia', "CPR" (Critical Penis Relief) and "Gross Anatomy" in addition to innovative ideas on marriage survival. FORGET DOGS A MAN'S BEST FRIEND IS HIS PENIS deals frankly and openly with a woman's innermost feelings about sex, and is up front about subjects once considered taboo. Enjoy the tips and sarcastic wit for situations that will surely be familiar from your own life experiences. Learn to deal positively with negative situations and become enlightened about why men say the stupid things they do and act bizarrely in otherwise normal situations. You'll be flipping pages to absorb the caricatures, cartoons, notable quotes, jokes and glossary, as well as humorous advice from "Granny". The easy-to-read text is filled with creative, unique and memorable viewpoints of male sexuality though the author's female perceptive and invasive eye.

Liz Lehman was born in Pittsburgh, Pennsylvania. Her career in fashion and design has included creating a chain of couture boutiques, buying at runway shows in New York, Paris, Milan, London and Mumbai. A licensed cosmetologist, she has appeared on television as an appearance and fashion expert. For In Pittsburgh Magazine she penned a monthly style column, being characterized as credible, experienced and controversial. Liz Lehman is a published novelist now residing in Boca Raton, Florida. In her spare time she enjoys traveling, movies and devouring New York Times crossword puzzles. She has been married to her third husband for more than twenty years, and following her support of renewable marriage contracts, she has been looking forward to another decision-time as conceptualized in this, her humorous, first self-help book for women.