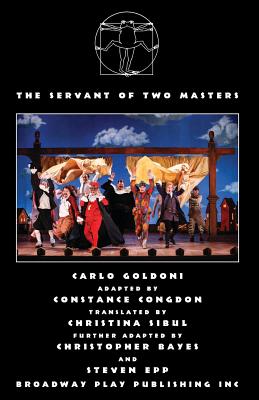 Goldoni's eighteenth-century masterpiece is an enduring story of love, passion, and mistaken identity. Young Venetian Clarice can't marry her lover, Silvio. She had been betrothed to Rasponi, who appears to have returned from the dead to claim her. But the Rasponi who appears is actually Beatrice, Rasponi's sister who is in disguise as her brother and has come to Venice to find her suitor, Florinda. Complications arise when a servant greedily seeks employment with both the disguised Beatrice and Florinda and spends the rest of the play trying to serve two masters while keeping the two unaware of the other's presence. The play is based on the Italian Renaissance theater style, Commedia dell arte, and reinvigorated the genre, which is so heavily based on carnival, while bringing to it an element of realism, mishaps, mix-ups, confusions, disguises and mistaken identity that come with the style.

..". revels in the transformative power of theater. The laughter would be quite enough to propel THE SERVANT OF TWO MASTERS onto a theater lover's must-see list. But then there's the magic. Now that's theater " --The New York Times

..". an uproarious, unapologetically lowbrow, compulsively enjoyable excursion into the outer realms of farce." --The Boston Globe

"It begins in elegance. Two Italian workmen stumble upon the remnants of an abandoned theater; when they open a trunk, fireflies flutter out and turn into the stars above a Venice of yore. But from then on we're mostly in the broadly colorful land of commedia dell'arte: a world of crafty servants and passionate lovers and notably bad communication ... stock characters, one-liners, slapstick, masks, songs and snatches of anachronistic improvisation." --Time Out New York

"Think the Three Stooges meets Family Guy meets a bawdy clown troupe, with a few musical numbers tossed in for good measure and a tendency to beat a dead horse of a joke until it miraculously stands back on its feet and becomes funny again ... The gonzo glee of the performances holds it all together ... while the whole thing doesn't add up to more than goofy fun, sometimes that is just what you need." --Brooklyn Paper
"Laughter is the best medicine sometimes. This is one of those times." --Lore Croghan, Brooklyn Daily Eagle

" A] raucously entertaining farce ... boy, do we laugh. Every formula for comedy is either turned on its head or played to its full predictive hilarity. And when the unpredictable moments happen -- this archetype of commedia dell'arte requires a fair amount of improvisation and ad-libbing -- the risk of going off-script is richly rewarded ... For the jaded theatergoer, THE SERVANT OF TWO MASTERS] provides all the things the wearied mind desires: longing, love, song, dance and the simple beauty of laughter." --OffOffOnline