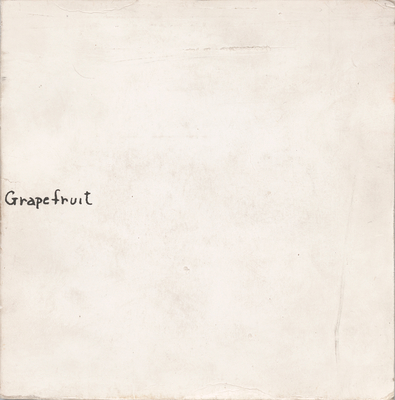 Yoko Ono is a seminal figure in the development of Conceptual art, performance and Fluxus, as well as film and new music. Her artist's book Grapefruit, first published in 1964 in Tokyo by Wunternaum Press in an edition of 500 copies, contains more than 150 works divided into five sections: MUSIC, PAINTING, EVENT, POETRY, OBJECT. These works--conceptual instructions--are the culmination of a process that dispensed with the physical and arrived at the idea.
Since the initial publication of Grapefruit, numerous expanded editions have been produced in many different languages. Today first-edition copies are nearly impossible to find. The Museum of Modern Art has now produced a facsimile of that first edition, making it available again in its original form. This slipcased paperback is produced from the copy of the 1964 book in The Museum of Modern Art Library. It is an exacting replica of Grapefruit as Ono first envisioned it.
Born in Tokyo in 1933, Yoko Ono moved to New York in the mid-1950s and became a critical link between the American and Japanese avant-gardes. Ono's groundbreaking work greatly influenced the international development of Conceptual art, performance art and experimental film and music. In celebration of Ono's 80th birthday in 2013, the Schirn Kunsthalle Frankfurt organized a major traveling retrospective.