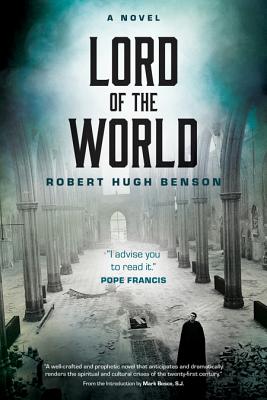 Robert Hugh Benson (1871-1914) was the youngest son of Edward White Benson, Archbishop of Canterbury, and younger brother of Edward Frederic Benson. In 1895, he was ordained a priest in the Church of England by his father who was then Archbishop of Canterbury. After many years of questioning and soul-searching he was received into the Roman Catholic Church in 1903. He was ordained a Catholic priest in 1904 and named a Monsignor in 1911. This book, written in 1907, is Benson's dystopic vision of a near future world in which religion has, by and large, been rejected or simply fallen by the wayside. The Catholic Church has retreated to Italy and Ireland, while the majority of the rest of the world is either Humanistic or Pantheistic. There is a 'one world' government, and euthanasia is widely available. The plot follows the tale of a priest, Percy Franklin, who becomes Pope Silvester III, and a mysterious man named Julian Felsenburgh, who is identical in looks to the priest and who becomes "Lord of the World." "The one condition of progress...on the planet that happened to be men's dwelling place, was peace, not the sword which Christ brought or that which Mahomet wielded; but peace that arose from, not passed, understanding; the peace that sprang from a knowledge that man was all and was able to develop himself only by sympathy with his fellows...