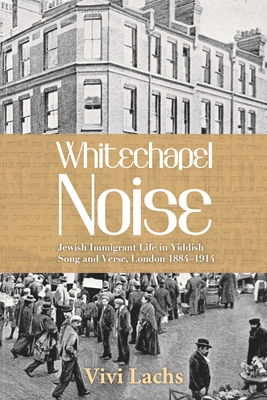 Archive material from the London Yiddish press, songbooks, and satirical writing offers a window into an untold cultural life of the Yiddish East End. Whitechapel Noise: Jewish Immigrant Life in Yiddish Song and Verse, London 1884-1914 by Vivi Lachs positions London's Yiddish popular culture in historical perspective within Anglo-Jewish history, English socialist aesthetics, and music-hall culture, and shows its relationship to the transnational Yiddish-speaking world. Layers of cultural references in the Yiddish texts are closely analyzed and quoted to draw out the complex yet intimate histories they contain, offering new perspectives on Anglo-Jewish historiography in three main areas: politics, sex, and religion.

The acculturation of Jewish immigrants to English life is an important part of the development of their social culture, as well as to the history of London. In part one of the book, Lachs presents an overview of daily immigrant life in London, its relationship to the Anglo-Jewish establishment, and the development of a popular Yiddish theatre and press, establishing a context from which these popular texts came. The author then analyzes the poems and songs, revealing the hidden social histories of the people writing and performing them. For example, how Morris Winchevsky's London poetry shows various attempts to engage the Jewish immigrant worker in specific London activism and political debate. Lachs explores how themes of marriage, relationships, and sexual exploitation appear regularly in music-hall songs, alluding to the changing nature of sexual roles in the immigrant London community influenced by the cultural mores of their new location. On the theme of religion, Lachs examines how ideas from Jewish texts and practice were used and manipulated by the socialist poets to advance ideas about class, equality, and revolution; and satirical writings offer glimpses into how the practice of religion and growing secularization was changing immigrants' daily lives in the encounter with modernity. The detailed and nuanced analysis found in Whitechapel Noise offers a new reading of Anglo-Jewish, London, and immigrant history. It is a must-read for Jewish and Anglo-Jewish historians and those interested in Yiddish, London, and migration studies.

Vivi Lachs is a social and cultural historian, Yiddishist, and associate research fellow at Birkbeck, University of London. She is the author of Making Multimedia in the Classroom and has written articles on education and Jewish history. She performs and composes music to London Yiddish lyrics.