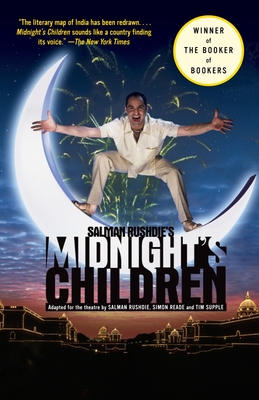 By Salman Rushdie
$13.95
Email or call for price

The original stage adaptation of Salman Rushdie’s Midnight’s Children, winner of the 1993 Booker of Bookers, the best book to win the Booker Prize in its first twenty-five years.

In the moments of upheaval that surround the stroke of midnight on August 14--15, 1947, the day India proclaimed its independence from Great Britain, 1,001 children are born--each of whom is gifted with supernatural powers. Midnight’s Children focuses on the fates of two of them--the illegitimate son of a poor Hindu woman and the male heir of a wealthy Muslim family--who become inextricably linked when a midwife switches the boys at birth.

An allegory of modern India, Midnight’s Children is a family saga set against the volatile events of the thirty years following the country’s independence--the partitioning of India and Pakistan, the rule of Indira Gandhi, the onset of violence and war, and the imposition of martial law. It is a magical and haunting tale, of fragmentation and of the struggle for identity and belonging that links personal life with national history.

In collaboration with Simon Reade, Tim Supple and the Royal Shakespeare Society, Salman Rushdie has adapted his masterpiece for the stage.

Salman Rushdie is the author of fourteen previous novels, including Midnight’s Children (for which he won the Booker Prize and the Best of the Booker), Shame, The Satanic Verses, The Moor’s Last Sigh, and Quichotte, all of which have been shortlisted for the Booker Prize; a collection of stories, East, West; a memoir, Joseph Anton; a work of reportage, The Jaguar Smile; and three collections of essays, most recently Languages of Truth. His many awards include the Whitbread Prize for Best Novel, which he won twice; the PEN/Allen Foundation Literary Service Award; the National Arts Award; the French Prix du Meilleur Livre Étranger; the European Union’s Aristeion Prize for Literature; the Budapest Grand Prize for Literature; and the Italian Premio Grinzane Cavour. He is a member of the American Academy of Arts and Letters and a fellow of the American Academy of Arts and Sciences, and he is a Distinguished Writer in Residence at New York University. He is a former president of PEN America. His books have been translated into over forty languages.

“The literary map of India has been redrawn. . . . Midnight’s Children sounds like a country finding its voice.” —The New York Times

“One of the most important books to come out of the English-speaking world in this generation.” —The New York Review of Books