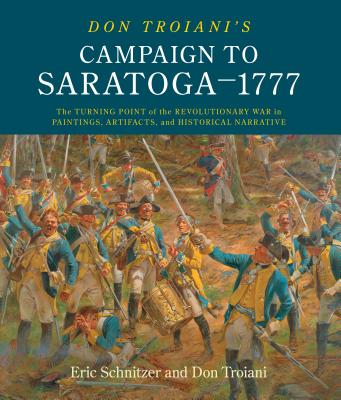 Don Troiani is well known for his extremely accurate historical and military paintings, scenes of great characters and grand action that have defined America's military heritage. An expert researcher with an extensive library and impressive private artifact study collections of Civil War, War of 1812, Revolutionary War, and World War II uniforms, equipage, insignia, and weapons, he has served as a consultant on films, including Cold Mountain and Night at the Museum 3, and television programs. His work has appeared in many publications and is represented in the collections of numerous museums, including the Smithsonian's Museum of History and Technology, the U.S. Marine Corps Museum, and the National Museum of African American History and Culture. His ten books published over the last 25 year and still in print have sold more than 200,000 copies. He lives in Southbury, CT. Eric Schnitzer has been an interpreter and historian at Saratoga National Historical Park for more than 20 years. He is recognized for his writing and research on the Northern Campaign of 1777, having published countless articles, lectured, and provided historical editing for many publications on the subject. Eric earned a degree in history and fine art from SUNY Albany and is founder and commander of the re-created 62nd Regiment of Foot. He lives in White Creek, NY, with his wife, Jenna.

Vie est Belle: The elegant art of living in the French style (Hardcover)