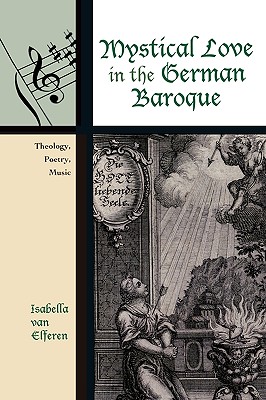 Mystical Love in the German Baroque: Theology, Poetry, Music identifies the cultural and devotional conventions underlying expressions of mystical love in poetry and music of the German baroque. It sheds new light on the seemingly erotic overtones in settings of the Song of Songs and dialogues between Christ and the faithful soul in late 17th- and early 18th-century cantatas by Heinrich Sch tz, Dieterich Buxtehude, and Johann Sebastian Bach. While these compositions have been interpreted solely as a secularizing tendency within devotional music of the baroque period, Isabella van Elferen demonstrates that they need to be viewed instead as intensifications of the sacred. Based on a wide selection of previously unedited or translated 17th- and 18th-century sources, van Elferen describes the history and development of baroque poetic and musical love discourses, from Sch tz's early works through Buxtehude's cantatas and Bach's cantatas and Passions. This long and multilayered discursive history of these compositions considers the love poetry of Petrarch, European reception of petrarchan imagery and traditions, its effect on the madrigal in Germany, and the role of Catholic medieval mystics in baroque Lutheranism. Van Elferen shows that Bach's compositional technique, based on the emotional characteristics of text and music rather than on the depiction of single words, allows the musical expression of mystical love to correspond closely to contemporary literary and theological conceptions of this affect.

Isabella van Elferen is assistant professor of Music and New Media at the Department of Media and Cultural Studies of Utrecht University. She is the editor of Nostalgia or Perversion? Gothic Rewriting from the Eighteenth Century until the Present Day (2007).