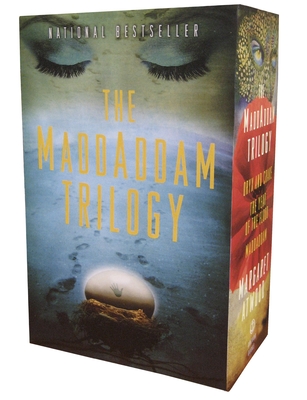 A boxed set (three trade paperbacks) of the internationally celebrated speculative fiction trilogy from one of the most visionary authors of our time, Margaret Atwood.

Across three stunning novels—Oryx and Crake, The Year of the Flood, and Maddaddam—the best-selling, Booker Prize-winning novelist projects us into a near future that is both all too familiar and beyond our imagining.

In Oryx and Crake, a man struggles to survive in a world where he may be the last human. In search of answers, he embarks on a journey through the lush wilderness that was so recently a great city, until powerful corporations took mankind on an uncontrolled genetic engineering ride. In The Year of the Flood the long-feared waterless flood has occurred, altering Earth as we know it and obliterating most human life. And in Maddaddam a small group of survivors band together with the Children of Crake: the gentle, bioengineered quasi-human species who will inherit this new earth.

Set in a darkly plausible future shaped by plagues, floods, and genetic engineering, these three novels take us from the end of the world to a brave new beginning. Thrilling, moving, and a triumph of imagination, the Maddaddam Trilogy confirms the ultimate endurance of humanity, community, and love.

Margaret Atwood, whose work has been published in thirty-five countries, is the author of more than forty books of fiction, poetry, and critical essays. In addition to The Handmaid’s Tale, her novels include Cat’s Eye, short-listed for the 1989 Booker Prize; Alias Grace, which won the Giller Prize in Canada and the Premio Mondello in Italy; The Blind Assassin, winner of the 2000 Booker Prize; Oryx and Crake, short-listed for the 2003 Man Booker Prize; The Year of the Flood; and her most recent, MaddAddam. She is the recipient of the Los Angeles Times Innovator’s Award, and lives in Toronto with the writer Graeme Gibson.

"Lights a fire from the fears of our age. . . . Miraculously balances humor, outrage, and beauty." —The New York Times Book Review

"Towering and intrepid. . . . Atwood does Orwell one better." —The New Yorker

"Margaret Atwood is an utterly thrilling storyteller." —The Washington Post