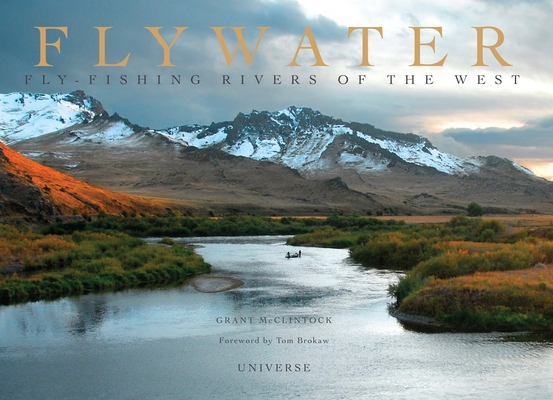 The magic and majesty of America’s greatest western fly-fishing rivers. Flywater brings us to the iconic creeks, springs, freestone rivers, and tailwaters that make the American West the world’s premier destination for fly fishing. Grant McClintock’s first book struck a chord with fishermen, and fifteen years later he takes the reader back to these fabulous places—from the storied Henry’s Fork to the Yellowstone to the Thompson River in British Columbia. With extraordinary new photography and wisdom, McClintock revisits these home waters and discovers countless others as well. Flywater is a gallery of moments and places. From Idaho and Montana to Oregon, Washington, and British Columbia, McClintock’s rich photography of trout and steelhead waters surrounded by beautiful Western landscapes creates a compelling journey that the reader, whether fisherman or non-fisherman, will thoroughly enjoy. For the serious fly fisherman, this is an album of shared experiences. For the uninitiated, it is an artfully crafted guidebook to an exotic new world that really does exist on the streams and rivers of the American West.

Grant McClintock divides his time between his native Oklahoma and Montana. Over the years he has fished, guided, and photographed many of the great trout, steelhead, and salmon rivers in the United States. He is also the author of two books, Flywater—one of the definitive books in the fishing literary canon—and Watermark.

Tom Brokaw, a native of South Dakota, graduated from the University of South Dakota with a degree in political science. He began his journalism career in Omaha and Atlanta before joining NBC News in 1966. Brokaw was the White House correspondent for NBC News during Watergate, and from 1976 to 1981 he anchored Today on NBC. He was the sole anchor and managing editor of NBC Nightly News with Tom Brokaw from 1983 through 2004. In 1998, Brokaw became a best selling author with the publication of The Greatest Generation. He wrote The Greatest Generation Speaks in 1999 and An Album of Memories in 2001. In November 2002, Brokaw's fourth best selling book, A Long Way from Home, a reflective look about growing up in the American Heartland, was released. Brokaw continues to report for NBC News, providing expertise during breaking news events, and reporting and producing long-form documentaries for Tom Brokaw Reports.

"There are books and there are books and this is a feast for the eyes, informative, intriguing, invaluable. It belongs in a place of prominence on your coffee table. Flywater by Grant McClintock ($45.00, 224 over-sized pages) is a true page turner with more than 200 photographs and moving, tender, serene scenes from Henry’s Fork to Yellowstone to the Thompson River in British Columbia. An album and a keepsake, Flywater is HIGHLY RECOMMENDED." ~Frommer Luxury Travel

"Flywater contains voluptuous shots of sport's top water bodies in the West and has helped me make it through several dreary winters in the Pacific Northwest. The photography and layout is top-notch and you soon get the feeling that you would've given ANYTHING to have been one of the folks involved with putting this package together. Just be sure to wear a bib when looking inside so you don't make indelible drool marks on the pages!”
- Less Oake, Amazon.com