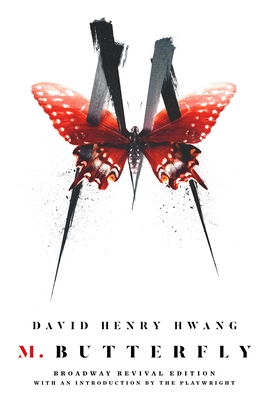 Winner of the Tony Award for Best Play, nominated for the Pulitzer Prize for Drama, and soon to be back on Broadway in a revival directed by the Lion King's Julie Taymor, starring Clive Owen

"A brilliant play of ideas… a visionary work that bridges the history and culture of two worlds."—Frank Rich, New York Times

Based on a true story that stunned the world, and inspired by Giacomo Puccini's opera Madama Butterfly, M. Butterfly was an immediate sensation when it premiered in 1988. It opens in the cramped prison cell where diplomat Rene Gallimard is being held captive by the French government—and by his own illusions. He recalls a time when Song Liling, the beautiful Chinese diva, touched him with a love as vivid, as seductive—and as elusive—as a butterfly.

How could he have known that his true love was, in fact, a spy for the Chinese government—and a man disguised as a woman? The diplomat relives the twenty-year affair from the temptation to the seduction, from its consummation to the scandal that ultimately consumed them both.

M. Butterfly is one of the most compelling, explosive, and slyly humorous dramas ever to light the Broadway stage, a work of unrivaled brilliance, illuminating the conflict between men and women, the differences between East and West, racial stereotypes—and the shadows we cast around our most cherished illusions.

TEXT OF THE BROADWAY REVIVAL

David Henry Hwang is an acclaimed playwright, screenwriter, and librettist. He won the 1988 Tony Award for M. Butterfly. He sits on the boards of the Dramatists Guild, Young Playwrights Inc., and the Museum Of Chinese in the Americas (MOCA). He has been named a Fellow of United States Artists and a Ford Foundation Art of Change Fellow. He currently writes for and produces Showtime's The Affair, and is on the Playwriting Faculty of the Columbia University School of the Arts Theatre Program.

"A brilliant play of ideas … a visionary work that bridges the history and culture of two worlds."—Frank Rich, New York Times

"Just when you've seen every possible coupling, M. Butterfly presents one of the most provocative and touching of all."—USA Today

"Hwang has something to say and an original, audacious way of saying it. A rarity on Broadway."—Edwin Wilson, Wall Street Journal