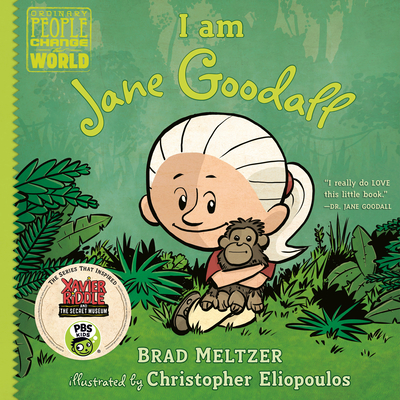 Chimpanzee scientist and conservationist Jane Goodall is the 10th hero in the New York Times bestselling picture book biography series for ages 5 to 8.

After receiving a stuffed animal chimpanzee for her first birthday, Jane Goodall's love of animals only grew. She saw what humans and animals had in common, not what makes us different, and used that to advocate for animal rights everywhere, becoming famous for her work with chimpanzees.

This friendly, fun biography series inspired the PBS Kids TV show Xavier Riddle and the Secret Museum. One great role model at a time, these books encourage kids to dream big. Included in each book are:

You’ll want to collect each book in this dynamic, informative series!

Brad Meltzer is the New York Times bestselling author of Heroes for My Son, Heroes for My Daughter, The Lincoln Conspiracy, and a number of suspense novels like The Lightning Rod. He also helped find the missing 9/11 flag with his History Channel television show Brad Meltzer’s Lost History. He lives in Florida with his wife and their three children. (And did you know that a picture of Brad is hidden in every book in this series?)

Christopher Eliopoulos began his illustration career at Marvel Comics, and has worked on thousands of comics, including his own Cow Boy and Franklin Richards: Son of a Genius. He is the author and illustrator of the picture books The Yawns Are Coming! and The Giggles Are Coming! and the graphic novels Cosmic Commandos and Monster Mayhem. He lives in New Jersey with his wife and their college-graduate twin sons (who also make an appearance in each Ordinary People Change the World book).