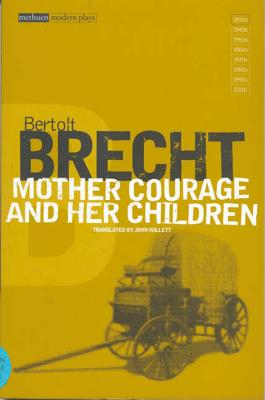 In this chronicle of the European Thirty Years War and taking place between the years 1624 and 1636, Mother Courage follows the armies back and forth across Europe, selling provisions and liquor from her canteen wagon to whomever she can. One by one she loses her children to the war but will not part with her livelihood - the wagon. The Berlin production of 1949, with Helene Weigel as Mother Courage, marked the foundation of the Berliner Ensemble.

Considered by many to be one of the greatest anti-war plays ever written and Brecht's masterpiece, the play is a powerful example of Epic Theatre and Brecht's use of alienation
effect to focus attention not on individual characters but on the
issues of the play. This edition published in Methuen Drama's Modern Classics series offers a full introduction as well as Brecht's own notes and textual variants, setting it apart from all other editions available in the English language. The play is presented in John Willett's trusted translation. 'One of the greatest poets and dramatists of our century' (Observer).

A major dramatist of the twentieth century, Bertolt Brecht (1898-1956) was the founder of one of the most influential theatre companies, the Berliner Ensemble, and the creator of some of the landmark plays of the twentieth century: The Threepenny Opera, The Life of Galileo, Mother Courage and Her Children and The Caucasian Chalk Circle. His plays and dramatic theory are central to the study of modern theatre.

"One of the greatest poets and dramatists of our century."—Observer