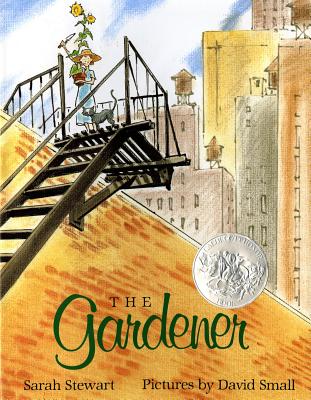 By the author-and-illustrator team of the bestselling The Library

Lydia Grace Finch brings a suitcase full of seeds to the big gray city, where she goes to stay with her Uncle Jim, a cantankerous baker. There she initiates a gradual transformation, bit by bit brightening the shop and bringing smiles to customers' faces with the flowers she grows. But it is in a secret place that Lydia Grace works on her masterpiece -- an ambitious rooftop garden -- which she hopes will make even Uncle Jim smile. Sarah Stewart introduces readers to an engaging and determined young heroine, whose story is told through letters written home, while David Small's illustrations beautifully evoke the Depression-era setting.

The Gardener is a 1997 New York Times Book Review Notable Children's Book of the Year and a 1998 Caldecott Honor Book.

Sarah Stewart writes award-winning children’s books with her husband, illustrator David Small. Their books include The Money Tree, The Friend, The Journey, The Library, and The Gardener, a Caldecott Honor book and winner of the Christopher Award. Stewart grew up in Texas and studied Latin and philosophy in college. She has been a teacher, speechwriter, and ombudsman, among other, less notable, jobs. She has reviewed children's books for The New York Times, has edited copy for The Texas Observer, and occasionally has a poem published in an obscure journal. Stewart and her husband, illustrator and author David Small, live in a historic home on a bend of the St. Joseph River in Michigan.

As a young artist I had many influences coming from some unexpected directions. My mother often took me to the art museum to expose me to culture, but at that time I felt little for the great European masters’ works hanging in their gilt frames. However, in school we had taken a field trip to the automobile factories and when, at the museum, I saw a mural about the car industry painted by the Mexican artist Diego Rivera, life and art fused for me. I suddenly realized the very real power artists have to shape our vision of the world. Here was a painting that showed something I knew about, expressing feelings about the factories that I had felt, restating my emotions and giving them order and form. Perhaps it was at that moment — standing before the great Rivera mural — that I determined to work at my talent for drawing and to become an artist.

Another influence was the hospital where my father, a radiologist, worked in the X-ray department. Evenings, I would go with my mother in our car to pick my father up from work. Often he was still busy and we had to wait, so I wandered in and out of the X-ray rooms with their silent, mysterious machines, through the labs, the darkrooms, and the waiting room, where I talked with the patients. There, at an early age, I learned a lot about life and death and saw images of the living insides of the human body illuminated in the dark. Those ghostly, glowing, starkly beautiful images stayed with me. Later on, in college art classes, I jumped at the chance to study anatomy, to draw and give names to those shapes with which I was so familiar. For the other art students, anatomy was an abstraction and a bore, but for me it was exciting and very real.

A third strong influence was my grandmother’s home in rural Indiana, where I spent my spring vacations as a boy. In those days — before television — we spent much of our time out of doors. In the hot afternoons I would wander through my grandmother’s big garden, or run with a dog named Butch to the bottom of a pasture to hunt for woodchucks. We would rest for a time next to a cattle trough in the shade of some huge willow trees. After dark I followed my grandfather down a corridor of trees to the train depot and watched the steam locomotives roll in and roll out. Back home again, my brother and I caught fireflies in jars and tried to read by them, or we lay around on blankets on the lawn, talking for hours beneath the stars. I’m grateful that at least part of my childhood was lived without a television set. I feel lucky to have known the world as it was back then.

Mr. Small’s illustrations have won him numerous awards, including a Caldecott Medal in 2001 and a Caldecott Honor in 1997. He has created over thirty books for children, has reviewed children’s books for The New York Times, and was the final judge for the 1989 Parents’ Choice Awards for Illustration. His editorial drawings regularly appear in publications such as The New York Times, The New Yorker, GQ, and The Washington Post.

David Small and his wife, the writer Sarah Stewart, live in a historic house on a bend of the St. Joseph River in Michigan. They have an Airedale named Simon and a cat named Otis.

“Late in the summer of 1935, Lydia Grace's parents are out of work, and to help make ends meet they send Lydia Grace to live with Uncle Jim, a baker in the city...Told entirely through letters, the story radiates her utterly (and convincingly) sunny personality...[An] inspiring offering from creative collaborators.” —Starred, Publishers Weekly

“A moving, wonderfully rich illustrated story. It is that rarity, a pictorial delight that in 20 double pages gives more and more of itself each time it's read, and whose silent complexities reveal themselves with continuing pleasure.” —The New York Times Book Review