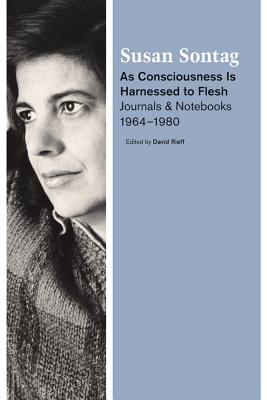 By Susan Sontag, David Rieff (Editor)
Email or call for price
Out of Print - Inquire at Store

This, the second of three volumes of Susan Sontag's journals and notebooks, begins where the first volume left off, in the middle of the 1960s. It traces and documents Sontag's evolution from fledgling participant in the artistic and intellectual world of New York City to world-renowned critic and dominant force in the world of ideas with the publication of the groundbreaking Against Interpretation in 1966.

As Consciousness is Harnessed to Flesh follows Sontag through the turbulent years of the 1960s—from her trip to Hanoi at the peak of the Vietnam War to her time making films in Sweden—up to 1981 and the beginning of the Reagan era. This is an invaluable record of the inner workings of one of the most inquisitive and analytical thinkers of the twentieth century at the height of her power. It is also a remarkable document of one individual's political and moral awakening.

Susan Sontag was the author of four novels, including The Benefactor, Death Kit, The Volcano Lover, and In America, which won the 2000 National Book Award for fiction; a collection of stories, I, etcetera; several plays, including Alice in Bed; and nine works of essays, among then On Photography, which won the National Books Critics Circle Award for criticism. In 2001, Sontag was awarded the Jerusalem Prize for the body of her work. She died in New York City in 2004.

David Rieff is a New York-based journalist and author. During the nineteen-nineties, he covered conflicts in Africa (Rwanda, Burundi, Congo, Liberia), the Balkans (Bosnia and Kosovo), and Central Asia. Now a contributing writer for the New York Times Magazine, he has written extensively about Iraq, and, more recently, about Latin America. He is the author of eight books, including Slaughterhouse: Bosnia and the Failure of the West and A Bed for the Night: Humanitarianism in Crisis. His memoir of his mother’s final illness, Swimming in a Sea of Death, appeared in January 2008. Based in New York City, Rieff is currently working on a book about the global food crisis.

“Sontag's essays are arch, intransigent--so it is a rare pleasure to read, in her diary, discoveries being made in real time. She applies her mind to itself with enthusiasm . . . The overall portrait gained from these journals seems to be of an impossibly fractured author--but the diaries also remind us that Sontag the writer and Sontag the woman, inevitably, occupy the same territory, so that even when she is writing about culture, she is, in a sense, exploring herself . . [a] difficult, fascinating volume . . . As her diaries reveal with such intensity, she harnessed only a fraction of her mind to produce the writing we have seen until now; the rest is consciousness.” —Emily Stokes, The Guardian

“In the three years since Reborn, the first volume of Susan Sontag's journals and notebooks, was published, at least three more books about the literary titan have appeared . . . [but] nothing compares with going to the source directly. The second of three volumes, As Consciousness Is Harnessed to Flesh, spans the years of Sontag's most prodigious output and her greatest intellectual influence, including the 1966 publication of her first volume of essays, the landmark Against Interpretation, and the equally influential Illness as Metaphor, a 1978 treatise inspired by her first bout with breast cancer.” —Melissa Anderson, Newsday

“A powerful self-portrait gradually emerges. Sontag avoided personal writing, as Rieff explains; perhaps, he suggests, the diaries constitute ‘the great autobiographical novel she never cared to write' . . . the reader warms more to her through her sudden lists of appealing adjectives (‘besotted, cerulean, ogival') or her likes (‘Drums, carnations, socks, raw peas') and dislikes (‘television, baked beans, hirsute men') . . . a tribute by a scrupulous son to his difficult, gifted mother . . . In its fragmentation and incoherence and passion, its combination of the erudite and the everyday, it is more true to life, both intellectual and emotional, than the most artful novel or careful biography. It may well be that Sontag's diaries, like Virginia Woolf's (which she knew and admired) will come to be seen as just as brilliant and important as anything she wrote.” —Anne Chisholm, The Telegraph

“That tormented Sontag is known to many, but she was not all Dark Lady. It's impossible to read these journals and not experience the warmer sides of her ambition: her deep admiration for certain artists around her, her animating wish to encourage and promote . . . Rieff designates the second volume as his mother's ‘political bildungsroman,' the record, as she put it, of ‘falling out of love with Communism.' Yet he chose to call this volume As Consciousness Is Harnessed to Flesh, a title pointing to her inner life rather than her political one. It is through this startling image, noted in a margin in May, 1965, that we today see the thirty-two-year-old Sontag awaken to her finitude: her life had to reach an end, just as consciousness is harnessed to flesh. But, then again, perhaps it isn't: language--which can capture and embody consciousness--lives on, and has its own fleshiness. As Sontag's hero, Roland Barthes, once wrote, ‘Language is a skin: I rub my language against the other. It is as if I had words instead of fingers, or fingers at the tip of my words. My language trembles with desire.' If anyone else's language trembles that way, as this volume of her journals attests, it is Susan Sontag's.” —Emily Greenhouse, The New Yorker

“The Sontag that appears here is, at times, very different from the strident academic who polarises public opinion. She is anxious, self-deprecating and frequently heartbroken . . . As in the earlier volume of diaries, Reborn, in which Sontag wrote reminders to herself to wash, this collection brings a more fragile, neurotic side into view. And yet there is still much of the academic who did not suffer fools--or ‘Modernist-nihilist-wise-guy-bullshit'--gladly. Her lengthy analyses of her relationships are broken up with quotations from Wittgenstein, or counterpoised by reported conversations with Jasper Johns and Joseph Brodsky . . . She writes dozens of obsessive lists . . . each a reminder of her voraciously catholic interests . . . Over the course of the diary, a picture of a complicated, brilliant person emerges. A little like her criticism, her diary entries combine her interests with bright, aphoristic turns of phrase . . . these diaries are a reminder of the value of the work that made her great, and also mysterious--"partly (and forever)" escaping from view.” —The Economist

“Consciousness is ultimately a very serious book, as it would have to be, as the record of the inner life of a renowned and resolutely serious person . . . It is a story of settling and unsettling, of restlessness and of trying to find a place to rest, of examining the parameters of adulthood, of questioning what it means to be a friend, a lover, a writer, an artist, a mother, a person in the world. ‘I have a wider range as a human being than as a writer. (With some writers, it's the opposite.) Only a fraction of me is available to be turned into art,' Sontag writes. If this is the case, then Consciousness is a presentation of the residue of Sontag, the part that is not art. It's life . . . At its best, [Consciousness] is Sontag turning her keen intellect onto the world and onto herself, practicing criticism in her architectural, adversarial, serious way . . . we should . . . be grateful for the dissemination of these notebooks, with their long stretches of self-analysis and their pops of insight.” —Lisa Levy, Los Angeles Review of Books

“Sontag seems addicted to writing lists--of films she has seen, or would like to see, and of her extensive reading, including Thomas Mann, Walter Benjamin and Sigmund Freud. But there is plenty of deeper, psychological revelation. While, outwardly, she appeared formidably confident, her entries here show her to be riddled with doubt, anxiety and a fear of showing weakness . . . These often intense accounts of the inner life of a passionate, highly cultured intellectual woman are riveting.” —Rebecca Wallersteiner, The Jewish Chronicle