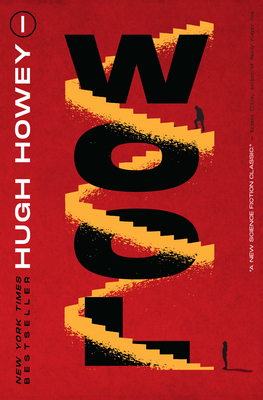 “One of dystopian fiction’s masterpieces alongside the likes of 1984 and Brave New World."
—Daily Express

The first book in the acclaimed, New York Times best-selling trilogy, Wool is the story of mankind clawing for survival. The world outside has grown toxic, the view of it limited, talk of it forbidden. The remnants of humanity live underground in a single silo. But there are always those who hope, who dream. These are the dangerous people, the residents who infect others with their optimism. Their punishment is simple. They are given the very thing they want: They are allowed to go outside.

After the previous sheriff leaves the silo in a terrifying ritual, Juliette, a mechanic from the down deep, is suddenly and inexplicably promoted to the head of law enforcement. With newfound power and with little regard for the customs she is supposed to abide, Juliette uncovers hints of a sinister conspiracy. Tugging this thread may uncover the truth ... or it could kill every last human alive.

Praise for Hugh Howey and The Silo Series     “Howey's Wool is an epic feat of imagination. You will live in this world.”—Justin Cronin, bestselling author of The Passage   “Secrets unfold with just the right pacing. . . If you're looking for a good post-apocalyptic read, you can't do much better than Wool.”—Rick Riordan, bestselling author of the Percy Jackson & the Olympians series     “With Wool Hugh Howey has created a new science fiction classic.”—Ernest Cline, bestselling author of Ready Player One     “Exilharating, intense, addictive.”—S.J. Watson, bestselling author of Before I Go to Sleep   “The success of Howey's Wool trilogy was no fluke. This is a superior SF thriller, both slick and gritty."—Financial Times     “Sci-fi’s Underground Hit. . . appeal[s] to both men and women, and has attracted hard-core science fiction fans as well as general readers, much like The Hunger Games.”—The Wall Street Journal