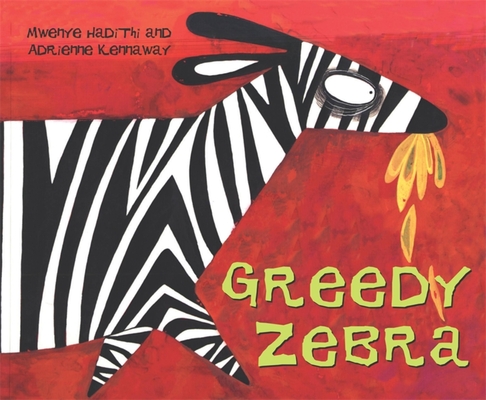 When the animals discovere a cave full of furs and skins, they discarde their drab skins for glossy new ones. Greedy zebra, arrives late, after a delicious snack, only to find a few stripes of black cloth. He squeezes into them but Greedy Zebra iis too big for them and his new coat bursts open!

The story of how all the animals chose their clothing, except for Greedy Zebra, who had to take the left-over pieces . . .

Author: Mwenye Hadithi was born in Nairobi in a rambling brick and wood house surrounded by ten acres. His early life was full of animals. He attended London University, studying languages and foreign literature. When his first attempts at short stories and radio plays were sold immediately, he decided to be the next great African Writer.

Illustrator: Adrienne Kennaway moved from Kenya to London when she was 15 to study at the Ealing School of Art. Later she attended L'Academia de Belle Arte in Rome. It was on her return to Kenya that she began illustrating the picture books that have made her well known.

A book that both adult and child will welcome.—Junior Education

A book with much to offer.—Books for Keeps

The Italian Teacher: A Novel (Paperback)