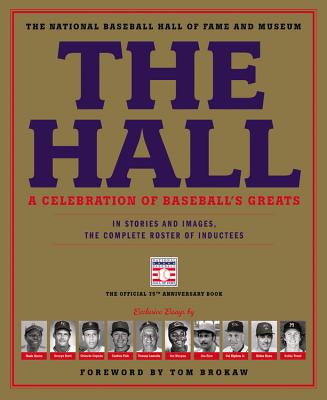 By Tom Brokaw (Foreword by), The National Baseball Hall of Fame and Museum
$35.00
Email or call for price

A deluxe baseball treasury unlike any other, complete with essays, photos, and player bios from The National Baseball Hall of Fame and Museum.

Everyone dreams of Cooperstown. It's a hallowed name in baseball, for players as well as their fans. It's a house where legends live; it's everything that's great about the game.

Never before has the National Baseball Hall of Fame and Museum published a complete registry of inductees with plaques, photographs, and extended biographies. In this unique, 75th anniversary edition, read the stories of every player inducted into the Hall, organized by position. Each section begins with an original essay by a living Hall of Famer who played that position: Hank Aaron, George Brett, Orlando Cepeda, Carlton Fisk, Tommy Lasorda, Joe Morgan, Jim Rice, Cal Ripken Jr., Nolan Ryan, and Robin Yount.

The National Baseball Hall of Fame and Museum, located in Cooperstown, NY, is an independent not-for-profit educational institution whose mission is to preserve baseball history, honor excellence within the game, and connect generations of baseball fans who share a love of the National Pastime.

"A treasure for baseball fans... THE HALL is a reminder that even though so much information is available now online about baseball's greats, it's still a gift to have their stories and photos in one giant package."—Doug Williams, San Diego Union-Tribune

"Serving both as a monument, archive and memorabilia repository, Baseball's Hall of Fame in Cooperstown, New York is well served by the huge, well-illustrated The Hall: A Celebration of Baseball's Greats: In Stories and Images, the Complete Roster of Inductees."—The Daily Beast

"This book is a must-read and must-own for baseball fans."—Fansided

"The Hall captures all 306 Hall of Famers in both biographical essays and spectacular photos, many of which can only be found in the Cooperstown shrine itself. It's kind of like a walk-through of Cooperstown."—New York Daily News' "The Score"