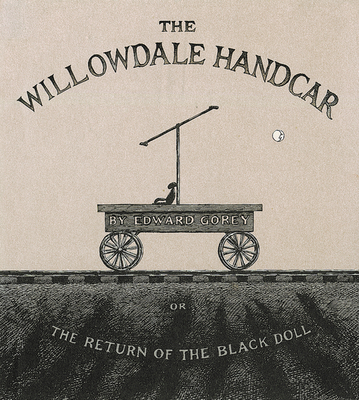 In this enigmatic, surreal, wonderfully entertaining tale, three mysterious figures set out from Willowdale, traveling by handcar. On the way to nowhere in particular they pass a number of odd characters and observe a series of baffling phenomena, from a house burning down in a field to a palatial mansion perched precariously on a bluff.
At once deeply vexing and utterly hilarious, darkly mysterious and amusingly absurd, The Willowdale Handcar is vintage Edward Gorey.

Edward Gorey (1925-2000) wrote and illustrated such popular books as The Doubtful Guest, The Gashlycrumb Tinies, and The Headless Bust. He was also a very successful set and costume designer, earning a Tony Award for his Broadway production of Edward Gorey's Dracula. Animated sequences of his work have introduced the PBS series Mystery! since 1980.

"A master of a genre of graphic storytelling [and] a brilliant draftsman."-The New York Times Book Review