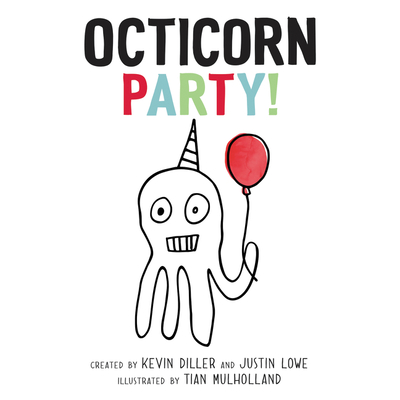 In this utterly charming sequel to the popular Hello, My Name Is Octicorn, Octi learns that he can’t please everyone....but he can encourage everyone to just be themselves.

Octicorn dreams of having a pool party. But what if no one comes? That would be the most embarrassing thing ever! So Octi sets out to have a party that will make everyone happy―until he realizes that may just be a disaster waiting to happen.

Octicorn Party! is for anyone who’s ever felt just a little bit different...which, as it turns out, is pretty much all of us.

Kevin Diller is a writer and producer who lives in Portland, Oregon, with his wife and two kids.

Tian Mulholland is an artist and a creative director at an advertising agency in Portland, Oregon. He lives in Vancouver, Washington, with his wife and three kids. Octicorn Party! is his picture book debut.

Justin Lowe is an artist and filmmaker who somehow entered adulthood with his childlike imagination entirely intact. Over a decade ago now, Justin took Sharpie to paper and combined an octopus with a unicorn. That doodle somehow took on a life of its own and is now throwing a party.

“Old fans and new viewers will enjoy reading this one aloud and sharing in Octicorn’s foibles. . . . [The story] carries a message about the importance of being oneself—and Octicorn is very distinctly himself.”
— Bulletin of the Center for Children’s Books